Remembering Megan Ridgeway on the 24th anniversary of her death 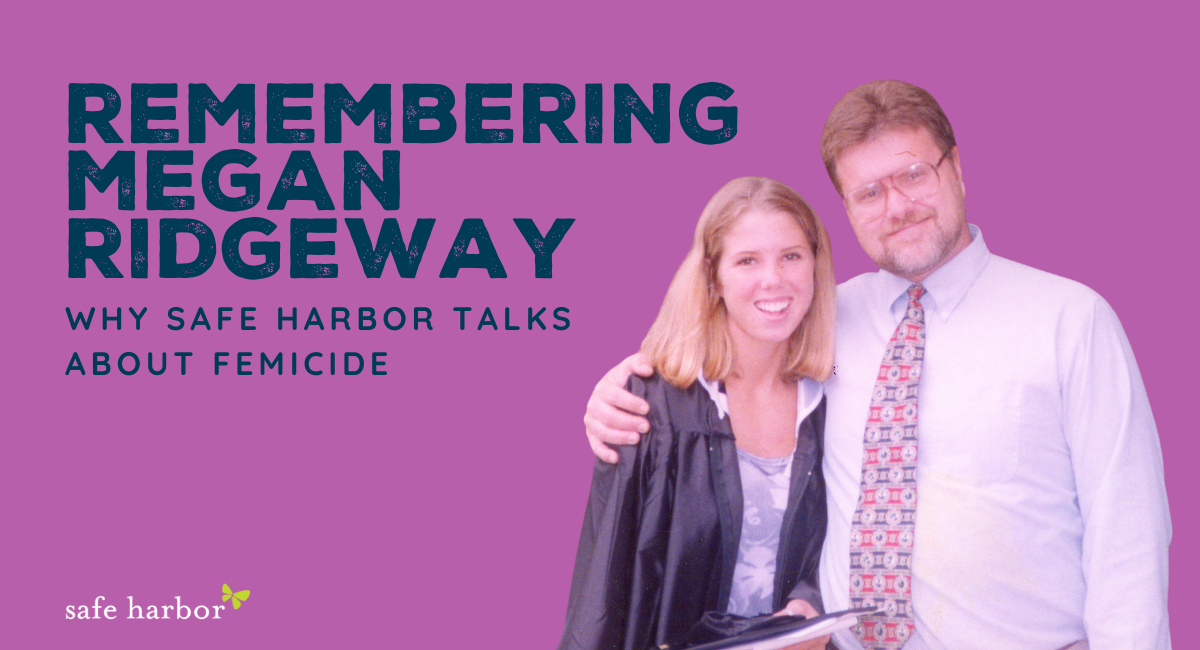 Why Safe Harbor talks about Femicide

On June 30th, 1997 an 18-year-old girl named Megan Ridgeway was murdered. She was murdered by her ex-boyfriend at the Mauldin community pool in public. It was a horrific moment for the Greenville community and a devastating day for Megan’s family, loved ones, and community members that witnessed it.

So, what does Megan’s death have to do with femicide? A femicide is the intentional killing or harm that leads to death because one identifies as a woman, female, or girl. There is a myth or perception that femicide is only something that happens “over there” and often linked to harmful cultural practices that seem far from our Upstate SC community. Some examples are: honor killings, deaths related to reproductive health like female genital mutilation, abortions, sexual assault, and deaths related to sex and drug trafficking where girls are used for their bodies and murdered after their use. When a young girl is murdered because her boyfriend is unable to accept that their relationship is over might seem like a far reach, however, these two things are related.

Though this problem shows up in interpersonal relationships, it is systematic. Girls and women around the world are told with words and/or actions that their lives are less than. In the US, this shows up in several ways, one of the most visible is the wage gap where a woman earns $0.82 for every $1 her male colleague earns. We must add that this wage gap is even bigger for women of color. While many people may individually voice that women are equal, the systems we have built do not reflect this. A young woman will internalize the message that she is less than, and a young man will internalize the message that he is more than. There are many more examples to point out, but I will leave it here. In an unequal system, with sometimes harmful gender stereotypes, we live in a world where women and girls are murdered for dishonoring their families or breaking up with a jealous boyfriend. And that is femicide.

Sadly, Megan and her family are not alone in their tragedy. South Carolina has historically been in the top 10 states for men murdering women. 1 in 3 teens will experience violence in a relationship. Females between the ages of 16-24 are more vulnerable to intimate partner violence than any other age group.

Safe Harbor offers direct services such as Emergency Shelter, Counseling & Advocacy, and Child & Family Counseling to survivors and victims of interpersonal violence. But we also offer Prevention and Outreach to the community because we believe in transforming our culture from one that accepts violence and abuse, to a culture in which everyone feels safe and valued in their relationships.

Megan’s story is special to our mission of eliminating cultural acceptance of domestic violence. In the aftermath of Megan’s death, Safe Harbor worked alongside her father, David Ridgeway to create our Prevention program, the Megan Project, now known as REP. REP facilitates dialogue with youth to prevent domestic violence in our community. 24 years after the death of his daughter, David still believes in the power of education and prevention. He recently said, “This is a tragedy no family should ever have to go through. [Young] people should be educated so they know they aren’t alone and there is someone there to help.”

No one deserves to be abused or murdered, especially not by those who are closest to them. Thanks to Megan’s family, and our community, Safe Harbor continues to work hard in our prevention and outreach efforts. In July, Safe Harbor will do an informational social media campaign about femicides. We’re going to share plenty of information about femicide globally, in the United States, and in South Carolina. Stay tuned for these important and informative posts as we remember and mark June 30th, because unfortunately, femicide is something we have to worry about in our community.