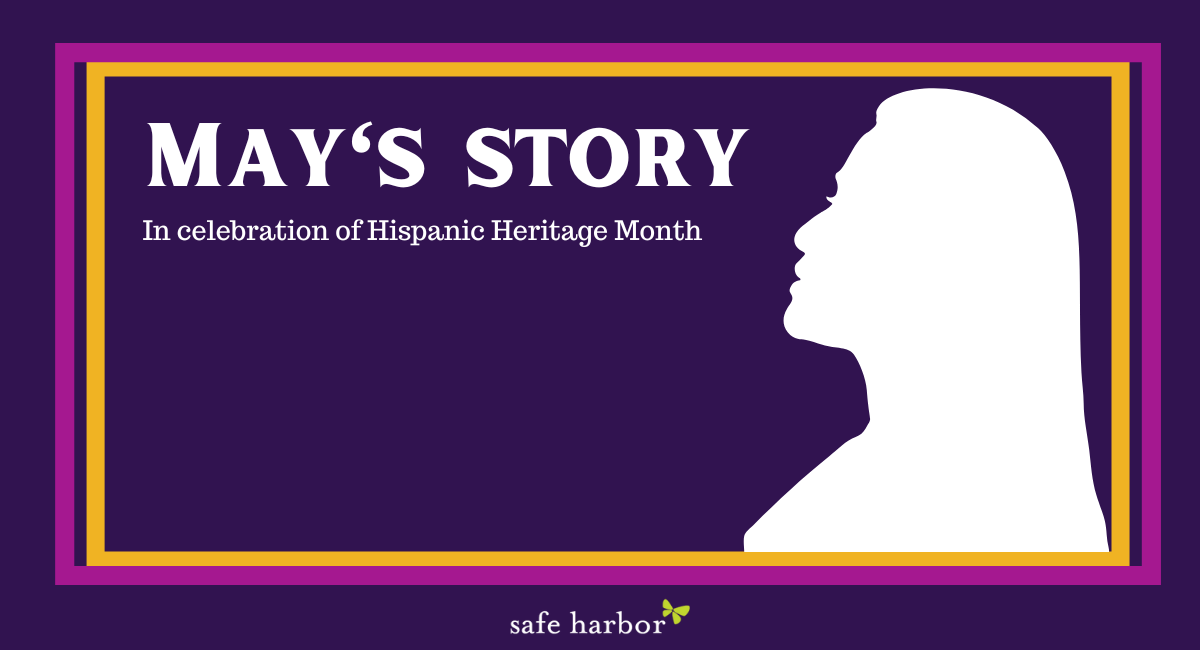 Here at Safe Harbor, we choose to celebrate Hispanic Heritage Month to recognize the achievements and contributions of Hispanic individuals, especially in the face of abuse and domestic violence. So we’d like to share a story of strength and resilience from a former client; we’ll call her May.

May is one of the many Hispanic people who are told a better life is waiting for them in the US. Due to the significant barriers she faced back in her home country of Honduras, this wasn’t a hard sell. She lived with her 6- and 8-year-old daughters and all she wanted was a future for her children that didn’t include starvation. May’s journey to the United States was by way of human trafficking. Here’s her side of the story.

Once May made the difficult decision to immigrate to the US with her daughters, she felt hope. The first part of their journey was walking from Honduras to Guatemala.  Once in Guatemala, she and her two daughters boarded a cargo truck filled with 200 people to travel to the border of Mexico. The truck had a floor put in the middle of the back, so that it had a lower and upper level for people to sit. She had to crawl into the lower level where she couldn’t even stand up. They were boxed in this cargo area for 15 hours with no food, no water, no access to use the bathroom, and no stops.  All they had for an oxygen supply was a small window that was so close to the motor that all they can breathe were fumes.   She almost lost her six-year-old who became very ill because there was no oxygen.   She prayed the whole ride that they would live.  The conditions were deplorable.  As you can imagine, it was very hot and because she was on the lower level of the truck, she was drenched in the sweat of the passengers above her. At one point during the journey, she heard shooting outside of the truck.  There were at least eight shots directed towards the truck.  It seemed they were being shot at by kidnappers with the intent to sell the passengers aboard. The truck was traveling at an extremely high speed during the shooting which almost ended with the truck flipping over.  May knew that if the truck flipped over no one would survive. Once the truck got to the border, she and her daughters had to cross the river. While crossing the river they had to swim as fast as they could so they would not get captured.  As she was crossing her eight-year-old kept falling into the river, swallowing the polluted water.  When they finally made it across the border, they had to wait 30 minutes in the cold with her daughter soaking wet until immigration arrived.  It was here that May and her daughters became a commodity of the human trafficking trade.

May came to the U.S., sold on a dream that life would be better. Instead, she arrived to a nightmare. Once in the US, May’s living situation was incredibly abusive at the hands of the person who “bought” her. She endured physical, emotional, and sexual abuse. She was treated like a slave and did it all to protect her children in the same house. This time is in May’s life is a blur and finally ended when law enforcement raided the house.

Through law enforcement, May was with Safe Harbor.  Safe Harbor provided shelter, resources to legal help and immigration assistance. May needed school to help her learn English, clothing and a safe place to stay. The children were enrolled in school and connected to other community organizations that helped the family with the resources they needed. May eventually left Safe Harbor with housing, a job and the ability to drive a car.

May was one of the few that was able to get away. But she May was a vulnerable target as a new immigrant with no resources, and her abusers knew this fact. Abusers use tactics of manipulation and power to lure their victims into leaving everything they know: painting a picture of false hope, controlling and isolating victims with immigration status, language barriers and no family. Even though May had innumerable barriers, she was able to rise above it, and finally creating a better life for herself and her girls.