An Open Letter to The Journal in Seneca 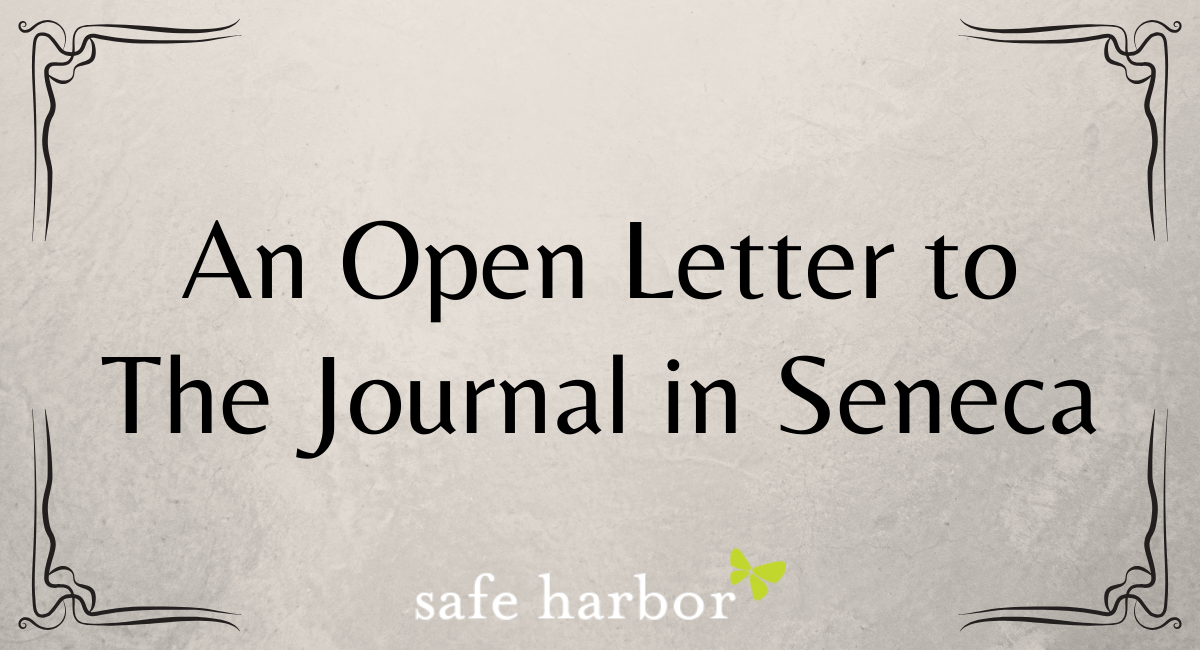 An Open Letter to The Journal in Seneca

On June 10, The Journal in Seneca (upstatetoday.com) published a political cartoon that portrayed overt racial stereotypes. This cartoon, described in our letter below, also depicts discriminatory biases about Black women specifically. At Safe Harbor, we recognize that domestic violence, racism and sexism intersect in the lives of Black women, resulting in high barriers to support and safety. Consequently, Black women are far more likely to die due to domestic violence.

This letter to the editor was shared with The Journal for publication last week. Unfortunately, The Journal chose not to publish it. Therefore, we are sharing it as an open letter to leaders of The Journal, its readers and our community at-large, because it is an issue that needs to be addressed at a community level.

As issues of systemic racism are revealed in our nation and our communities, we are committed to our vision to influence a culture where all people feel safe and valued in their relationships. We hope community members will join us on Tuesday, June 30 at 6:00pm for a virtual Community Talk-Back on Black Women’s Experiences with Intimate Partner Violence.

On June 10, you published an Al Goodwyn political cartoon. This cartoon depicts a donkey stretched out on the couch in a tank top, surrounded by empty cans and crumbs of food in a dirty living room. In the same room, a woman with the words “Black Community” written on her dress holds a baby and scared little girl. She says, “I can’t leave him. We’ve been together for decades. Plus, he says we’d never survive on our own.”

While this cartoon is degrading enough through its interpretation of the relationship between the Black community and the Democratic Party, we at Safe Harbor recognize the systemic injustices that this image endorses far beyond its political message. The racial and gender stereotypes shown through this cartoon depict many reasons why Black women often feel that they must stay silent when facing violence and control in their lives.

When we think about the “why” behind some of these statistics, we can begin by looking at the current events that are happening in our nation right now regarding systemic racism and how these issues pose a persistent threat to Black lives. The stories of Ahmaud Arbery, Breonna Taylor, George Floyd and countless others open our eyes to the vast height of barriers faced by people of color caused by a society that devalues and diminishes Black lives. When intimate partner violence enters the life of a woman of color, it intersects with issues of racial injustice that she and her community already face on a daily basis. Will she feel safe to call 911 on her spouse or partner? Reach out to her supervisor at work for support? Seek help from a local organization providing services to victims? Feel confident that she will be believed?

We understand that the Journal has apologized for publishing this cartoon. But, what is next? In the words of this unknown quote, “Actions speak louder than words. We can apologize over and over, but if our actions don’t change, the words become meaningless.”

Now is the time to follow your apologies with action steps. Recognizing how issues of systemic racism and intimate partner violence intersect, we at Safe Harbor are asking our communities to come together for a Community Talk-Back on Black Women’s Experiences with Intimate Partner Violence. Through this community conversation, survivors and community members will discuss the impact of domestic violence on Black women, the stigma and biases that Black survivors of abuse face, and how we can work together to influence a culture that believes, values, and supports Black women who experience abuse.

We challenge you and other leaders of the Seneca Journal to join us on June 30 as we listen and learn together. Community members are also invited to join this critical conversation. May our actions be louder than our words.

The Staff of Safe Harbor

The Shadow Behind Me: A Stalking Story