Our Statement on Anti-Asian Racism 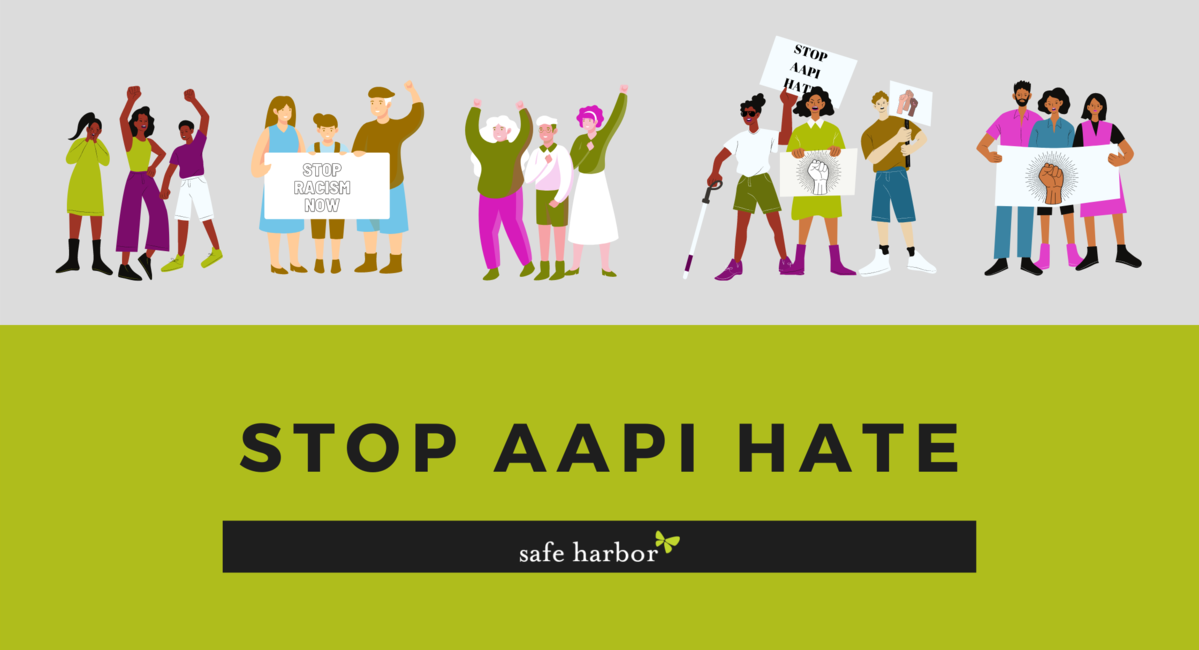 At Safe Harbor, we are saddened and heartbroken as we hear about the increased incidents of violent hate crimes committed against Asian Americans and Pacific Islanders, including the massacre that took place in Atlanta on March 16th. Eight people’s lives were cut short by someone armed with hate, racism, misogyny, and a gun. We name the victims whose names we know: Daoyou Feng, Paul Andre Michels, Julie Park, Hyeon Jeong Park, Xiaojie Yan, Delaina Ashley Yaun. We hope that those who lost their lives in the shooting, as well as those who have lost their lives from the many other incidents of hate crimes, will rest in power and that their loved ones will eventually find peace after such unnecessary tragic and painful losses.

The messages conveyed by law enforcement officials who responded to the shooting in Atlanta are infuriating. The minimizing of the shooter’s racism and objectification of Asian women is another way of victim blaming, something we see over and over again at Safe Harbor. When will victims stop being blamed for the actions of violence committed against them? When will those who perpetrate violence be held accountable for the harm they cause? When will we stop denying that racism and white supremacy not only exist but permeate the fabric of our culture in the United States? Domestic violence, violence against women, racism, misogyny will continue to plague the lives of women of color until we all do our part to dismantle those systems within ourselves, our families, our workplaces, our communities, and the institutions within our communities.

Unfortunately, it seems that acts of extreme violence or even death must occur for us to pay attention to issues that have long been a part of our country. Racism against Asians and Pacific Islanders in the United States is not new. The Chinese Exclusion Act of 1882, the Rock Springs Massacre of 1885, the Tacoma Riot of 1885, sexual enslavement of Asian women and girls, the Chinese Massacre of 1871, the Hells Canyon Massacre of 1887 and the more recent Atlanta shooting are just some examples of discrimination, racism, violence, and murder that Asians and Pacific Islanders have suffered in the United States. Please see the list of resources below to learn more about these incidents.

Harmful stereotypes such as the model minority myth and racist tropes such as calling COVID-19 'the Kung Flu' harm Asian American and Pacific Islanders. We encourage you to learn more about how this rhetoric negatively impacts the AAPI community and have left resources below.

We must speak up against racism because we know that survivors of domestic violence experience many barriers to finding help or leaving their abusive relationships. Women of color and immigrants must often confront the fear of deportation when deciding whether or not to call the police, navigate services that often do not offer culturally relevant services, amongst other barriers.  According to the Women of Color Network, in a study as many as 55% of Asian women reported experiencing intimate physical and/or sexual violence during their lifetime. To learn more about our stance on anti-racism and how domestic violence intersects with racism please read our statement on anti-racism.

Women of Color Network | Domestic Violence in Comunities of Color

Launch Learning | In Solidarity with the Asian American Community