Centering the Voices of Survivors During the Election 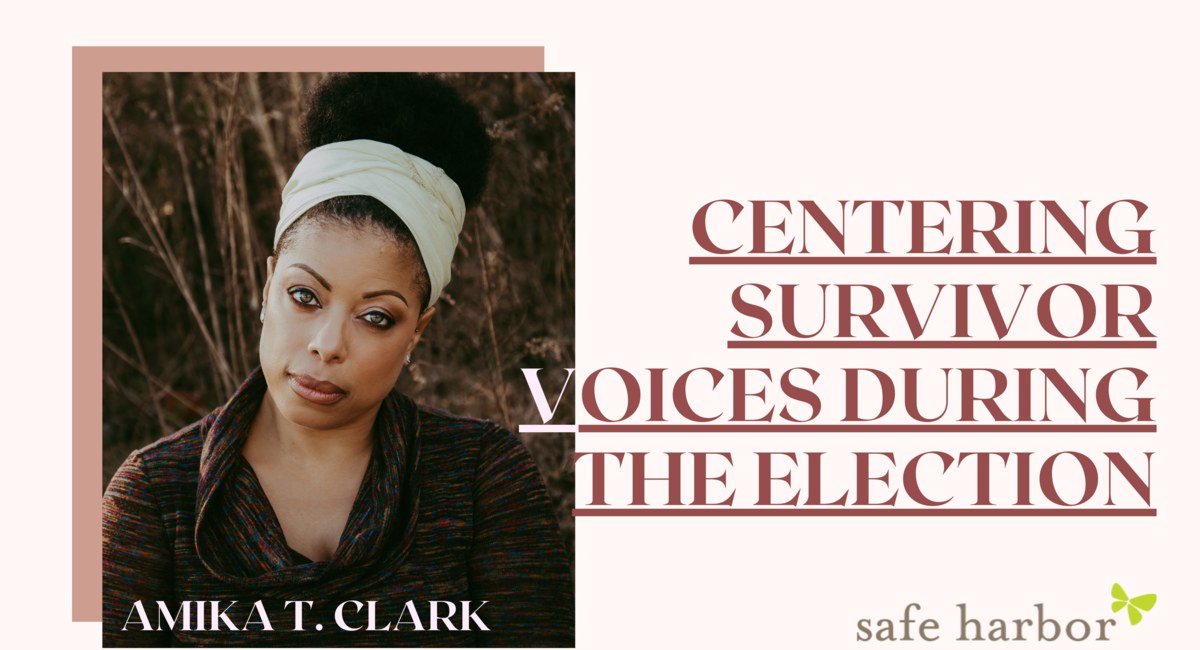 The following is the transcript of a speech given by Safe Harbor Survivor Ambassador, Amika T. Clark at a rally with the goal of facilitating a conversation between law enforcement and the residents of the community. Though her speech focuses on the barriers she faced when interacting with law enforcement, Amika felt that her sentiments expressed in this speech also reflect the importance of survivors having a voice in choosing who will represent them and their best interests in the law-making processes. Learn more about resources and information about voting safely in 2020 elections.

meet us in the middle rally speech by amika t. clark

Dr. Maya Angelou said “There is no greater agony than bearing an untold story inside you.”

Domestic violence is a pattern of behaviors in which one person in an intimate relationship exerts power and coercive control over his/her spouse or partner. The controlling behaviors can take the form of physical, sexual, financial and/or emotional abuse.

On March 16th 2014 I made not my 1st, not my 5th but my 11th call to my local law enforcement in THIS state. This doesn’t account for the numerous calls I made while residing in other states. that day as many times before I was struck in the face by my 6’ 3” tall 230 lb husband. My face burned and I could feel the bruising raising up as my skin begin to tighten. In that moment as my life flashed before my eyes I knew I only had a couple of choices: 1) retaliate and may the better person win or 2) call the police. Knowing that my four-year daughter was on the other side of the wall, I elected to call the police. As I stood there talking to the operator I watched my husband pick up the phone and make the same call to the police. When the operator on the other end of the phone told me that someone was on the way I ran upstairs to the master bedroom with my daughter, locked the door and watched out the window for an officer to arrive. Those 15 minutes felt like hours as I could hear my husband going in and out of the garage, slamming doors and knocking things over. I looked out the window and saw two male officers arrive in two different cars. I rush downstairs to meet them only for one to hastily tell me to go upstairs with him and that the other was going to speak to my husband. Upstairs I could feel the anxiety rising and the lump in my throat has me beginning to feel nauseous. After the officer finished speaking to me he asked me to stay upstairs and he goes and confers with his colleague. The next minutes were an outer body experience where you feel like you’re standing at the edge of the railway as the subway whirls by you. I was told that my injuries could’ve been self-inflicted compared to those of my husband. I was arrested and placed in the back seat of the car while my daughter watched out the window. Injuries that were incurred mysteriously on his body . The officers asked for batteries to even take pictures of my face. In that moment my background, my degrees nor my fear even mattered. I was a black female at the mercy of two white male officers. My story had a different ending than many others……. I was released on my own recognizance and the charges were dismissed …… 22 months later.

What would have helped:

I am just 1 woman, 1 voice…. Domestic violence is not rare; 1 in 4 women and 1 in 9 men report experiencing physical abuse from an intimate partner in the U.S.

Recall the statistic I stated in my opening… S.C. is currently ranked #5 in the nation for women killed by men. Greenville County often has the highest # of reported DV incidents in SC annually.

When we think about the “why” behind some of these statistics, we can begin by looking at the current events that are happening in our nation right now regarding systemic racism and how these issues pose a persistent threat to Black lives. The stories of Ahmaud Arbery, Breonna Taylor, George Floyd and countless others open our eyes to the vast height of barriers faced by people of color caused by a society that devalues and diminishes Black lives. When intimate partner violence enters the life of a woman of color, it intersects with issues of racial injustice that she and her community already face on a daily basis. Will she feel safe to call 911 on her spouse or partner? Reach out to her supervisor at work for support? Seek help from a local organization providing services to victims? Feel confident that she will be believed?

It was only my awareness of Safe Harbor through volunteering at work that I was able to navigate the next steps.

A constructive definitive change requires active engagement by everyone.

Fierce and determined I am a woman that stands,

With rounded hips, full pink lips, fleeing from what society and gender deems is for man.

Cracked and some parts broken, I can’t continue to bend.

Some are present, and others don’t even try.

Pillow wet and soaked with tears,

Awakening to some fanfare and more fake cheers.

Focus is the only choice,

Finding ME, MY words, MY voice.